Just a Thought on Pipelines 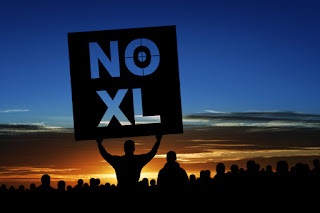 Here's an idea. When a government has to pump billions of dollars into a pipeline because the private sector won't touch it then we should ask "why?"

Kinder Morgan, the Texas doppleganger of the EnRon crew, was preparing to fold its hand on the Trans-Mountain pipeline project. It wasn't a bluff either. Even when Ottawa went to the cowboys with offers of profit guarantees, all it got was nyet. Finally the Trudeau government folded and bought the pipeline for the cowboys' inflated asking price. The rest is rather dreary history.

In the land next door, a frisky premier, Jason Kenney, ignored his government's fiscal embarrassment to cough up 1.5 billion scarce dollars to resuscitate the Keystone XL pipeline. That was an act of desperation. Obama had nixed the deal but there was a new guy in the Oval, Kenney's kindred spirit, Trump. So Kenney went all in and rolled the dice.

If the KXL was such a good deal, what was the private sector overlooking? Why weren't they jumping all over it? It could have been that they knew bitumen was at risk of becoming a stranded asset. Perhaps they realized that the days of high-carbon, low-value sludge were numbered. Whatever they knew, Kenney obviously didn't.

Just as Kenney is left to cry in his beer and moan about nasty Joe, the private sector must be grateful that they dodged that bullet.

This governmental largesse is really just another multi-billion dollar subsidy for an already massively subsidized fossil energy industry. It signals not strength but weakness. The Oil Patch knows how to play that for all it's worth. And, once again, we wind up holding the bag. Well done, Justin. Well done, Jason. Not.

Today's Globe & Mail is asking the same question: what was Jason Kenney thinking?

Why Mr. Kenney would have sunk $1.5-billion on a dicey proposition ahead of the U.S. election, and with an unstable and unpopular President in office, is bewildering and was grossly irresponsible. The Premier suggested at the time that if the province didn’t step in, then Keystone would not likely get built. Again, all the more reason to take a step back, not forward.

Mr. Kenney is already talking about ways in which the province might be able to recoup some of its Keystone investment, suggesting, for instance, that some of the pipeline that has already been built could be sold for parts. Yes, maybe Ottawa could use them to finish the Trans Mountain pipeline expansion.

It would be funny if it weren’t so tragic.

The Globe's Gary Mason says watch for Kenney to pressure Trudeau to push through the Energy East or Northern Gateway pipelines, anything to let Kenney find a way to blame the entire fiasco on Ottawa.