If You Were Hoping Americans Would Finally Have an Epiphany 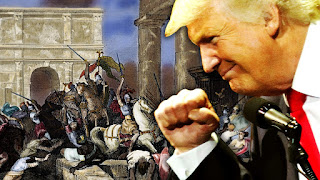 Newsweek thought, in the aftermath of Trump's terrorist attack on Congress on Wednesday, it might be a good idea to consult Republican supporters. Were they aghast? Were they finally done with their fiendish cult leader?

And Donald Trump will be pleased with this news. A slim majority of Republicans polled, 51 per cent, say they don't believe Trump bears any blame for the siege of the Capitol or the five deaths that ensued.  That's good news, not just for Trump but for his 'stay behind' partisans in the Treason Caucus.

I have to say that, when it comes to cults, Trump has 'em stacked up like cordwood. He'd make Jim Jones jealous or at least he would if Jim wasn't dead.