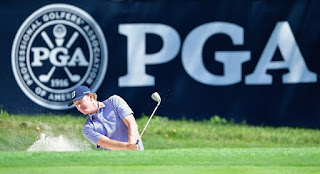 Donald Trump is a collector - of golf courses. He's got 17 to date, some of them losing quite a bit of money.

He's milked the Trump brand for all it's worth but that was before the world got a good/bad look at him when he foolishly chose to seek the American presidency. Since then we've been regaled with the sordid excuse for a man, a guy David Letterman described as "broken." And the more we see him the less there is to like.

Trump branded properties are hurting. Unit-holders in a Trump building in Vancouver couldn't wait to get that name off the facade. Apparently it was depressing their property values.

The Trump National golf resort in Bedminster, New Jersey, was lined up to host the 2022 PGA championship or at least it was before the Mango Mussolini launched his flying monkeys to attack the Capitol. The PGA now says that plan would be "detrimental."

True to form, the Trump Organization points out that they have a binding contract to host the PGA championship event.