And Trump Will Still Get Off the Hook 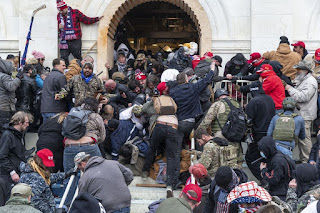 The US Department of Homeland Security issued a domestic terrorism warning today.

The Republican gift, it seems, just keeps on giving. Trump may be gone, for now at least, but his venom remains potent. Trump, of courses, is being aided and abetted by Republicans in the House and Senate who perpetuate the 'stolen election' lie. These are not people seeking reconciliation  and unity. They, instead, stoke the fires of conspiracies and aggression.

Since the January 6 attack on the Capitol building, poll after poll of self-identified Republicans show that "stop the steal" lives on and not very many Republicans will admit that Trump should be held accountable for launching the insurrection.

On the last RealTime, Maher interviewed a retired FBI agent who argued that the US needs a domestic terrorism law. Existing criminal law does not provide a penalty deterrent for the terrorism element of the crime. If you commit an act of domestic terrorism you should be facing a minimum sentence of 14 years to life. Get them out of circulation. Cull the herd. How many of those thugs that swarmed the Capitol building would have thought twice if they knew it meant a minimum 14 year stretch in the Greybar Hotel?

Then again it's all wishful thinking when America's Domestic-Terrorist-in-Chief is untouchable. Mother Jones' columnist, David Corn, takes a deep dive into Trump's evolution to become America's first terrorist president. When it comes to Trump's personal advancement, lines are rarely drawn and, when they are, they're hopelessly blurred.