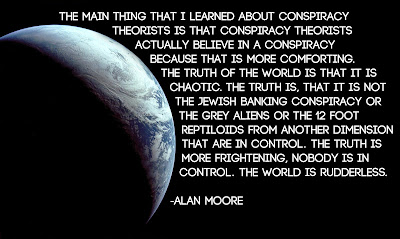 Conspiracy theories propelled Donald Trump to power but it's been the stuff of American politics since the 1776 Revolution.

The United States of America was founded on a conspiracy theory. In the lead-up to the War of Independence, revolutionaries argued that a tax on tea or stamps is not just a tax, but the opening gambit in a sinister plot of oppression. The signers of the Declaration of Independence were convinced — based on “a long train of abuses and usurpations” — that the king of Great Britain was conspiring to establish “an absolute Tyranny” over the colonies.

“The document itself is a written conspiracy theory,” says Nancy Rosenblum, a political theorist emerita at Harvard University. It suggests that there’s more going on than meets the eye, that someone with bad intentions is working behind the scenes.

If conspiracy theories are as old as politics, they’re also — in the era of Donald Trump and QAnon — as current as the latest headlines. Earlier this month, the American democracy born of an eighteenth century conspiracy theory faced its most severe threat yet — from another conspiracy theory, that (all evidence to the contrary) the 2020 presidential election was rigged.

But, while American history may be rich in conspiracy fantasies, old garden-variety conspiracy theory has mutated into something potentially more dangerous.

Trump epitomizes a new type of “conspiracy without theory” that relies on sheer assertion and repetition rather than evidence and reason. (Rosenblum is coeditor of the Annual Review of Political Science.) Trump’s baseless tweets that the election was rigged, she says, stand in contrast to Kennedy assassination conspiracists obsessing over bullet trajectories or 9/11 conspiracists diving into data on the temperature at which jet fuel burns. “This conspiracy thinking that’s going on today takes a very different and novel and dangerous form,” she says, because it seeks to delegitimize political rivals, government agencies, the press and others who might stand in the way. “It unsettles the ground on which we argue, negotiate, and even disagree,” she and coauthor Russell Muirhead wrote in their 2019 book, A Lot of People Are Saying: The New Conspiracism and the Assault on Democracy. “It makes democracy unworkable — and ultimately, it makes democracy seem unworthy.”

One of the most influential ideas in conspiracy theory scholarship is that people who identify themselves as politically conservative are more likely to believe in conspiracy theories. In a widely cited 1964 essay in Harper’s Magazine, Columbia University historian Richard Hofstadter argued that a “paranoid style” runs through conservative political movements of the twentieth century, fed by distrust of “cosmopolitans and intellectuals.” Uscinski says his polling research finds no evidence that conservatives are more prone to believe in conspiracy theories than liberals, but other researchers still think there’s something to this idea.

In a recent series of studies, van der Linden and colleagues conducted online surveys of more than 5,000 Americans from across the political spectrum, asking them to rate their political preferences and respond to questions that were developed by psychologists to measure conspiratorial thinking and paranoia. One survey item, for example, asked participants to rate on a scale of 0 to 100 their agreement with the statement: “I think that events which superficially seem to lack a connection are often the result of secret activities.”

People at both extremes of the political spectrum were more prone to conspiracy thinking than those in the middle, but conservatives tended to be more conspiratorial than liberals, the researchers reported in Political Psychology last year. “We think this is convincing evidence…of these differences between liberals and conservatives,” van der Linden says. “I wouldn’t say it’s a large effect, but it wasn’t tiny, either.”

This difference, he thinks, may be rooted in group psychology. “There’s a lot of research that shows that, whereas the liberals are a bit more extroverted and rebellious and so on, conservatives tend to be focused on managing uncertainty and threat and in-group values,” he says. Conspiracy theories are one way to make sense of events that seem overwhelming and may feel as though they threaten the groups and values that people most identify with, he says. “It’s definitely a mechanism to try to restore a sense of agency and control over the narrative.”

...Talking a true believer out of their belief in a conspiracy can be nearly impossible. (The believer will assume you’re hopelessly naïve or, worse, that you’re part of the cover-up). Even when conspiracy theories have bold predictions that don’t come true, such as QAnon’s claim that Trump would win reelection, followers twist themselves in logical knots to cling to their core beliefs. “These beliefs are important to people, and letting them go means letting go of something important that has determined the way they see the world for some time,” Douglas says.

While the researchers are looking for ways to counter the spread of these mutated conspiracy theories they're not having much success finding practical ways for restoring a "herd immunity" level of critical thinking.

Conspiracy theories flourished as far back as the Roman Empire, and they inspired an angry mob to storm the U.S. Capitol just last week. Specific theories may come and go, but the allure of conspiracy theories for people trying to make sense of events beyond their control seems more enduring. For better — and of late, very much for worse — they appear to be a permanent part of the human condition.