The Trials of Joe Biden

There'll be no honeymoon when Joe Biden is inaugurated the 46th president of the United States. 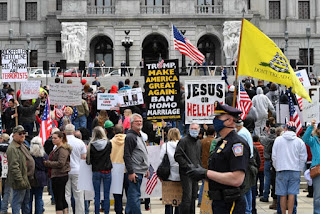 The Covid pandemic seems to be taking a nasty turn due to a new variant that is spreading throughout the UK and has already been found in Europe. It's not a more lethal strain. It's simply a lot more infectious, faster spreading. That's not a good thing for any country where a sizeable segment of the population refuses to abide by public health precautions, seeing them as an affront to their rights and freedoms.

Two weeks ago Boris Johnson was ridiculing the opposition, accusing them of wanting to "cancel Christmas." There'd be none of that weak-kneed nonsense for Johnson, not while the Tories held power. Isolated lockdowns here and there, perhaps, but only if essential and the idea of a nation-wide lockdown was out of the question.

What a difference a week or two can make. Now Johnson is imposing the sort of lockdown he derided so recently. Of course, he now says, he's only following the science.

Could this cross the Atlantic? Sure. Are we ready for another body blow? That's unclear. What we do know is that Team Trump has been pretty miserly when it comes to assisting the Biden transition. 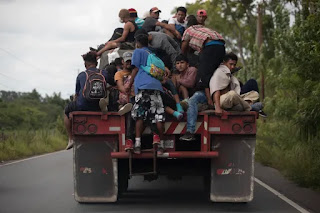 Then there's the looming migration out of Central America. The area, already reeling from climate change and the Covid pandemic, was hammered by two major hurricanes in November.  Houses were destroyed, villages wrecked, people were buried in mudslides, especially in Honduras.

The hurricanes seem to have been the last straw for many Hondurans who are leaving their no longer viable villages to seek safety in the only direction available - north.

Honduran authorities are trying to block the migration before the refugees can enter Guatemala, demanding to see travel documents and proof of Covid testing.

A major confrontation at America's southern border has been foreseen for years. Gwynne Dyer wrote of it in his 2008 book, "Climate Wars: The Fight for Survival as the World Overheats." The 2020s are predicted to see the onset of a new phenomenon called "climate departure." This foretells a major shift to much higher than once normal average temperatures that will first ravage tropical regions such as the Caribbean and Central America.  For countries where many people eke out a living through subsistence agriculture, the onset of potentially lethal heatwaves could render some areas uninhabitable.

This poses an enormous challenge to a freshly-minted president Biden. He's inheriting a deeply and quite deliberately divided populace, one side like trained pitbulls, snarl and bristle at the mere mention of migrants.  The Republicans will exploit this for all it's worth using compassion and decency as an anvil on which to break the Democrat upstart. We think we've seen the Ugly American. I think there's more to come.

Of course ten or twenty years ago those who foresaw climate departure didn't reckon on viral contagions and devastating hurricanes. What they did try to warn of was the possibility of a "cascade" of disruptive events, each compounding the others, which seems to be unfolding at the moment in Central America.

From 20 years of following climate science all I really know is that we have no idea what's coming next but I think by the time the 2020s have passed, today will be a fond memory.