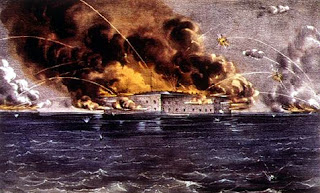 It was April 12, 1861 when the South Carolina militia attacked the US Army's Fort Sumter, sparking the American Civil War.

We might have thought this travesty was over when the US Supreme Court refused to hear the petition calling for the court to set aside the vote in Michigan, Pennsylvania, Wisconsin and Georgia and declare Donald Trump re-elected. But that would underestimate the forces of sedition being whipped up by Trump and his supporters who refuse to take the court's "no" for an answer.

The Washington Post looks at what's next as Trump forces rally in Washington, egged on by felons Roger Stone and Michael Flynn.

As they have several times since the election, Trump supporters — including members of the Proud Boys, the far-right, male-only, extremist group that Trump struggled to denounce during a presidential debate with Biden — gathered on Saturday in Washington, with with boldface names from Trump world like Roger Stone and retired Gen. Michael Flynn rallying the crowd.

“Supreme Court’s decision, well, you know, don’t get bent out of shape because there are still avenues that are being, avenues to approach and we are attacking the wall,” Flynn said to flag-waving protesters gathered outside the Supreme Court.

But exactly what those “avenues” are was not spelled out. Electors will meet in each state on Monday to cast their votes. Biden won enough states to give him 306 electoral college votes to Trump’s 232, and he leads the national popular vote by more than 7 million.

Trump continues to refuse to concede, instead perpetuating falsehoods and baseless claims that widespread voter fraud rigged the election. But there has been no evidence presented of widespread fraud in the election, and last week Attorney General William P. Barr said the Justice Department has found no evidence that would overturn Biden’s victory. Courts at every level have rejected dozens of lawsuits filed by the Trump campaign and his allies, citing this lack of evidence.

The president has one last stand — the Jan. 6 vote in a joint session of Congress to count the electoral votes. Already at least one Republican lawmaker, Rep. Mo Brooks of Alabama, has said he’ll challenge the electoral vote that day. If just one U.S. senator joins him, the Electoral Count Act of 1877 will force every member of Congress to vote on whether to accept the results in the states where Republican baselessly decry voter fraud.

It’s unclear whether Brooks will find significant support for the move, which would primarily be theater by making every Republican take a side. Already Trump has seen astonishing support for his efforts to overturn the election — 126 House Republicans, including Minority Leader Kevin McCarthy (R-Calif.), signed an amicus brief backing the Texas lawsuit.

“There’s still evidence that needs to be considered. The House may be the last forum available for us to present our arguments,” tweeted Rep. Matt Gaetz (R-Fla.), one of Trump’s most faithful acolytes.

A handful of Republicans on Capitol Hill have declared the race over and Biden the winner, and have condemned Trump and colleagues for not doing the same.

“Since Election Night, a lot of people have been confusing voters by spinning Kenyan Birther-type, ‘Chavez rigged the election from the grave’ conspiracy theories, but every American who cares about the rule of law should take comfort that the Supreme Court — including all three of President Trump’s picks — closed the book on the nonsense,” Sen. Ben Sasse (R-Neb.) said in a statement.

But many GOP lawmakers continue to perpetuate the lie that the race was stolen from Trump.

"I don’t have proof that men landed on the moon in 1969, because I wasn’t there,” Rep. Doug LaMalfa (R-Calif.) told CNN’s Chris Cuomo on Friday night when asked for proof that there was widespread voter fraud. He added that he won’t accept the results until Jan. 20, when Biden’s hand is on the Bible.