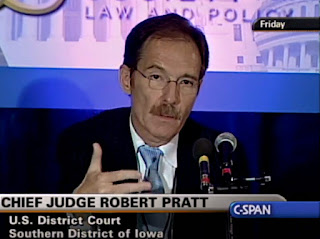 Pratt said, “Apparently to get a pardon, one has to be either a Republican, a convicted child murderer or a turkey.”

Pratt was referring to Trump’s Republican allies in the government, security contractors convicted of killing civilians in Iraq, and the turkey that is pardoned each Thanksgiving.

The AP reports that Pratt’s statement came when he was asked by the news outlet for a comment on the recent pardoning of former aides for ex-Rep. Ron Paul (R-Texas) who were convicted on corruption charges related to the Iowa caucuses.

Jesse Benton and John Tate both worked on Paul’s 2012 presidential campaign, reports the AP, and were convicted of hiding $73,000 worth of payments to former Iowa state Sen. Kent Sorenson (R) in exchange for his endorsement of Paul. Both men were sentenced to six months of home confinement and probation before Trump pardoned then.

Pratt oversaw Sorenson’s case in 2017 and sentenced him to 15 months in prison despite prosecutors recommending a more lenient sentence in light of Sorenson’s guilty plea and cooperation, notes the AP.