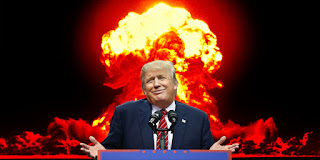 It might be wishful thinking but Washington Post columnist, Jennifer Rubin, writes that this time (as opposed to every previous 'this time') Donald Trump and the GOP are quits. Trump's 'burn the house down on your way out' routine has gone too far for some, not yet far enough for others. There's no way in hell he could win the Republican presidential nomination in 2024.

Ms. Rubin, like George Will, David Frum and many others, is an old school Republican, no longer the mainstream in today's GOP that finds itself about as divided as the country itself. There are conservative Republicans, the old school; fickle Republicans, the sort who sail to the prevailing winds, like Mitch McConnell; and then there are the radical Republicans, the Freedom Caucus whose origins trace back to the Tea Party lunacy.

Rubin, like others in the Old School camp argue that the Republican Party has become so debased, so reactionary, that it is beyond redemption. She lists a litany of Trump's sins, from bungling the pandemic to pardoning murderers to his avowed hatred for the United States itself - it's Department of Justice, the FBI, the Supreme Court, Homeland Security and more - that will leave him persona non grata once he's safely out the White House door. Yet the way he's managing his departure could be the best thing Trump has ever done for the Republican Party.

This is the conduct of someone who wants to burn down his party — and the country — if he cannot be president. While his cruelty still astounds, his temper tantrum also reveals the foolishness of Republicans who placated and defended him for four years. They enabled him throughout his presidency, prevented his removal in the impeachment trial, tried to subvert our election so he could remain in power and spent four years insisting that supporting him was the right thing to do for the sake of the “rule of law” and an economic boom (both of which he undermined). He is rendering Republicans who tied themselves in knots even more uncomfortable when they are pressed to answer, “Was it really worth it?” (It was hard enough for them to answer in the affirmative before this latest rampage, with more than 300,000 American deaths from covid-19 and the economy in tatters.)

...Many of us in the Never Trumper camp have argued that the Republican Party is not worth preserving after years of its leaders’ moral abdication, refusal to uphold their oaths and toleration of racism. What we did not bank on was that after corrupting the party, Trump would be the perfect means of destroying the GOP. In doing so, he might finally make a contribution to U.S. democracy.